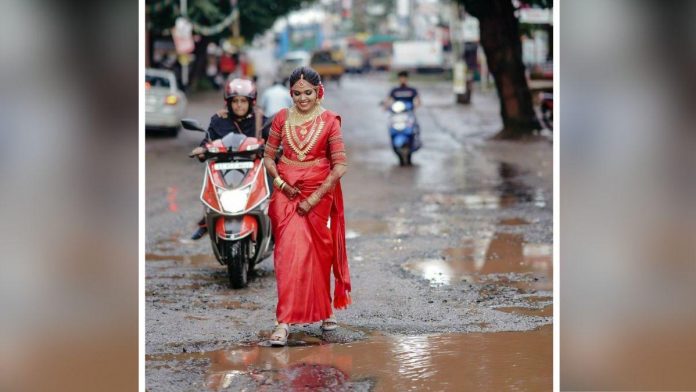 Although you must have seen many wedding photoshoots, but in Kerala, a bride has done a unique photoshoot. Through this, the bride has tried to highlight the big problem of the area. Not only this, the photoshoot has also been shared on social media. It’s grabbing people’s attention now.

The bride is moving forward avoiding these pits. The pits are full of dirty water, but the photographer doing the photoshoot is seen constantly pointing them to move forward.

The video and photo of this photoshoot has been shared by the Instagram handle Arrow_weddingcompany. Along with this a caption has also been written. ‘Bride’s photoshoot in the middle of the road’. This is a unique photoshoot between the potholes on the road. Its video is now going viral.

The plight of the roads in India is not hidden from anyone. Many times accidents happen due to potholes in the roads, but instead of improving, the situation remains the same. In such a situation, this bride from Kerala decided to do a unique photoshoot highlighting this problem.