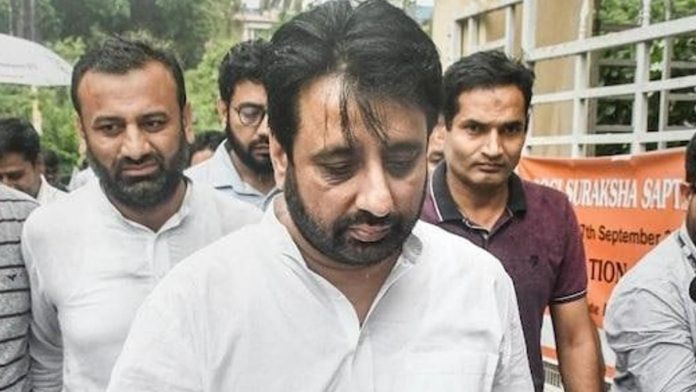 Aam Aadmi Party (AAP) MLA Amanatullah Khan from Okhla assembly constituency of Delhi has come under the target of Anti Corruption Bureau (ACB). The ACB team raided 5 places including his house and arrested Amanatullah and his partner Hamid.

During the raid, the close associates of Amanatullah were accused of assault and misbehavior by attacking the officers of ACB. In this case, now Delhi Police has arrested 4 of his close friends. A case was registered in the case at Jamia Police Station.

The arrested accused had asked the officers to leave the spot while abusing them during the raid. During this, he also pushed. Whose video went viral on social media. The names of those arrested by the police are Shakeel Ahmed (45), Afsar (20), Anwar (31) and Sikandar (45).

This entire action is being taken in the matter related to Waqf Board. According to ACB, Amanatullah had recruited 32 people in the Delhi Waqf Board in a fake manner. He was accused of corruption and favoritism. The AAP MLA is also accused of illegally letting out several properties of the Waqf Board.

The ACB team raided on 16 September. A foreign pistol, Baretta, was recovered from Amanatullah’s hideout. It is being said that this pistol does not have a license. It was told that this pistol was found from the house of Amanatullah’s business partner Hamid Ali. Along with this, a cash of Rs 12 lakh has also been found. The team of Anti Corruption Bureau conducted raids in Jamia, Okhla and Gafoor Nagar.

this is the case

Amanatullah Khan on charges of ‘financial disturbances’ in Waqf Board’s bank accounts, creation of tenancy in Waqf Board properties, ‘corruption’ in purchase of vehicles and ‘illegal appointment’ of 33 persons in violation of service rules in Delhi Waqf Board Huh. In this regard, the ACB had registered a case in January 2020 under various provisions of the Prevention of Corruption Act and the Indian Penal Code. Khan has been accused of misusing his position while being the chairman of the Delhi Waqf Board and making appointments of his close ones. In May this year, the CBI had sought permission to prosecute Amanatullah Khan.