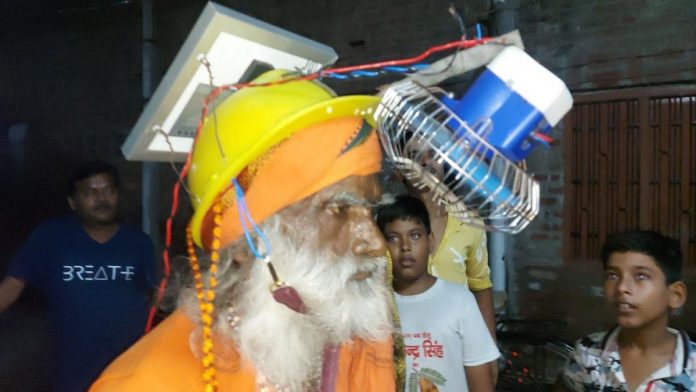 Lalluram, 77, who lives in Lakhimpur Kheri district of Uttar Pradesh, is in the headlines these days. Lalluram has taken such a jugaad to escape from the heat, due to which he has now become viral on social media. In fact, he has installed a solar panel on his head and a fan running from it so that he can get relief from the heat.

Lalluram, 77, installed a solar panel over the plastic cap and also set a fan on the face with it. Lalluram goes from shop to shop to sell garlands of lemons and flowers, and in the past, he had a heat stroke due to excessive heat.

Due to this his health had deteriorated and he was unable to leave the house and deliver lemon and flower garlands to the shops. Due to this the condition of his family had become pathetic. Later, when his health recovered, he found a jugaad to escape the heat.

Now when Lalluram comes out in the city with a jugaad fan on the streets, people start taking selfies with him on the way. Regarding this jugaad, Lalluram says that it is a very small business, we sell lemon garlands.

He said, ‘That is how we feed the children. We had fallen ill in the middle, so we have made this stuff by borrowing. It has a solar plate at the back and a fan in the front. It gives a lot of relief when we walk in the sun. Lalluram said, ‘If the wind comes directly on the face, then there is relief from the heat.’ He said, ‘We keep wandering on the road for the sake of children, then in the evening we feed our children. It is God’s will, we have no will.’

He said, ‘We didn’t do anything, they gave the brain and we did it. Made it and checked it and saw it started moving, after which we put it on this head.

Lalluram’s wife Geeta Devi tells that our husband has made a solar fan, his health had deteriorated. They do not tolerate sunlight.