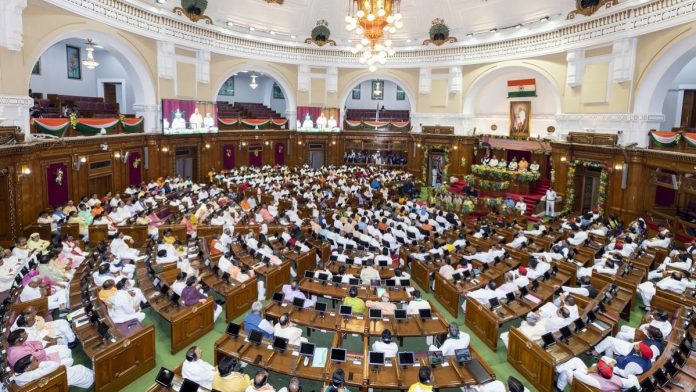 After the rape and murder of Dalit sisters in Lakhimpur, the opposition is attacking the government of Chief Minister Yogi Adityanath. Meanwhile, the Yogi government has fixed a day for discussion on women’s issues in the assembly during the monsoon session of the UP legislature starting from September 19. This will be a new initiative of this kind in the assembly. On this special day, only issues related to women will be discussed in the House, while women MLAs will get a chance to speak more and more. During the proceedings of the House, issues like women’s health, education, social status and gender discrimination will be discussed on this day. The special thing is that on this day, Leader of the House and Uttar Pradesh Chief Minister Yogi Adityanath and Leader of Opposition Akhilesh Yadav will also speak on the issue of women.

The monsoon session of the Uttar Pradesh Legislative Assembly is going to start from September 19. This will be the second session of the second term of the Yogi government. In this session, where the opposition has made tremendous preparations to surround the government on many issues. At the same time, the government has set 22 September as a day especially for discussing issues related to women. On this day all women MLAs will get a chance to speak on priority basis.

This will be the first time in the assembly session, when such an initiative is being taken. After Question Hour on September 22, only women MLAs will get a chance to speak. The whole house will listen to him. On this day, along with the education, health, safety, socio-economic status of women, gender discrimination and changes coming due to the efforts of the government will also be discussed in the house.

Obviously, while the legislators of the ruling party can express their views on the benefits to women from the central and state schemes, the women legislators of the opposition will have an eye on women’s safety and crime against women. This is the first time such an opportunity is being prepared for it. Although its format is yet to come out, but in this, women legislators will have to speak on the fixed topic. Assembly Speaker Satish Mahana, who has taken a new initiative in the assembly, says that women MLAs will be given a chance to speak and we want the Leader of the House and the Leader of the Opposition to speak for their encouragement.

Regarding such initiatives being taken during the assembly session, women legislators say that this initiative is special for many reasons. First that the women legislators will get a chance to speak. Along with this, all such issues will be raised in it which are necessary.

Rajni Tiwari, MLA from Shahabad and Minister of State for Higher Education in the Yogi government, considers this an important initiative. She says that those who are MLAs many times, they speak, but with this initiative, women legislators who have come for the first time, will get a chance to speak in the house. For this, thanks to the Speaker of the Assembly, who has decided this plan with such innovative thinking. Rajni Tiwari believes that when an issue arises in the House and there is a meaningful discussion, a way will also be found.

Meanwhile, in the meeting of the Business Advisory Committee, the agenda of the assembly was discussed, and cooperation was sought from all the parties in the all-party meeting. Samajwadi Party has demanded to run the house for at least 10 days.