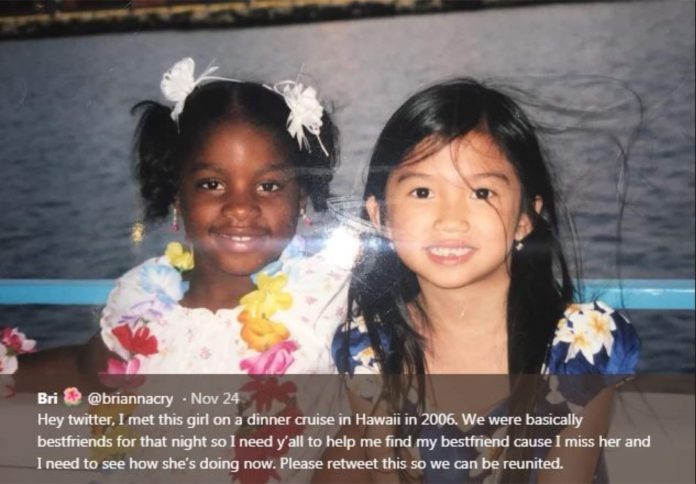 Twitter is a social media platform that has been largely used by people across the globe. The world has become smaller after the use of this platform by almost every individual. People have been using it to express ideas, opinions, suggestions. Twitter has also been used for promotional engagements and advertisements. But recently it became the reunion partner of two girls who had no better way to connect with her friend.
It all started when Brianna, who lives in Mississippi, tweeted about how she missed her age-old best friend.

It was adorable to see how she missed that one night spent with her best friend on a cruise. She posted a picture with her and asked Twitter to retweet the tweet in order to help her out.
Her tweet got more than 250000 likes and was retweeted around 111000. It didn’t take much for her best friend to know that Brianna was missing her.

Soon Heidi (Twitter name- heii_tree) responded with her picture that proved that she was the same girl with whom Brianna became friends on Cruise that night.

She was even amazed at the way people responded to Brianna’s tweet and how they were reunited by Twitter. In fact, Brianna herself was stunned and tweeted, “ALL I FOUND HER WTF!! TWITTER IS LITERALLY AMAZING.”

While all of this happened, the two friends are still not hoping to meet soon.There was even fake “go fund me” fundraising to make these friends meet which was called out as a scam by Heidi.

The power of internet has been clearly displayed through this small incident. The incident has proven that social media platforms can be used well for the benefit of humanity and for good cause.