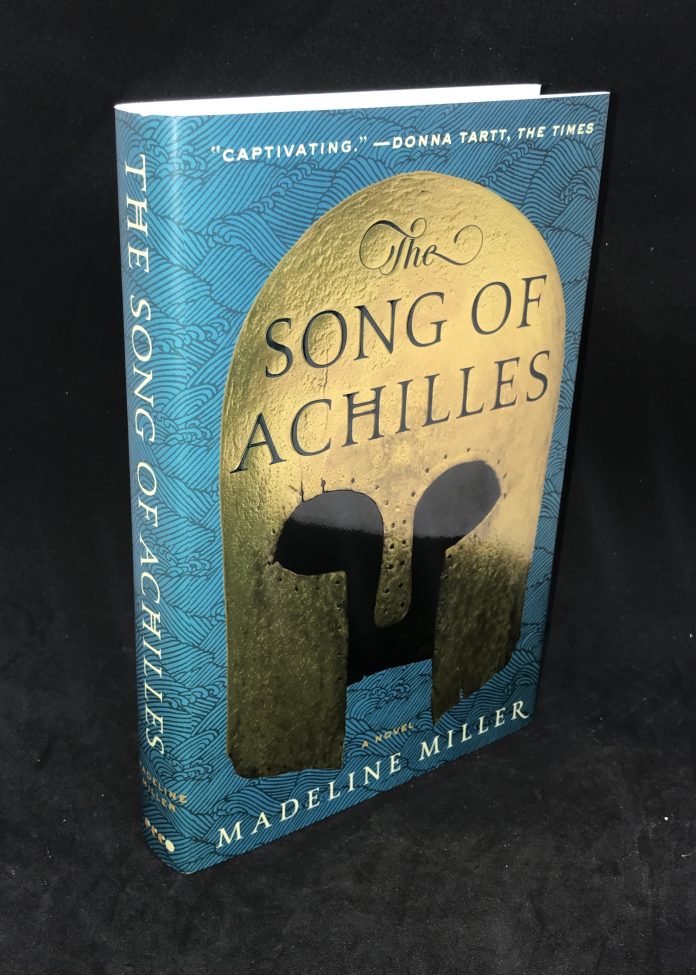 Synopsis:The legend begins… Greece in the age of heroes. Patroclus, an awkward young prince, has been exiled to the kingdom of Phthia to be raised in the shadow of King Peleus and his golden son, Achilles. “The best of all the Greeks”—strong, beautiful, and the child of a goddess—Achilles is everything the shamed Patroclus is not. Yet despite their differences, the boys become steadfast companions. Their bond deepens as they grow into young men and become skilled in the arts of war and medicine—much to the displeasure and the fury of Achilles’ mother, Thetis, a cruel sea goddess with a hatred of mortals. When word comes that Helen of Sparta has been kidnapped, the men of Greece, bound by blood and oath, must lay siege to Troy in her name. Seduced by the promise of a glorious destiny, Achilles joins their cause, and torn between love and fear for his friend, Patroclus follows. Little do they know that the Fates will test them both as never

Review:Amazon Best Books of the Month, March 2012: Betrayal, ardor, war, and prophecies–in The Song of Achilles, author Madeline Miller brings together everything I love about The Iliad without the labor of epic poetry. In this new twist on the Trojan War story, Patroclus and Achilles are the quintessential mismatched pair–a mortal underdog exiled in shame and a glorious demigod revered by all–but what would a novel of ancient Greece be without star-crossed love? Miller includes other good tragic bits–foreknowledge of death, ruthless choices that pit pride and reputation against the lives of innocents, the folly of men and gods–and through her beautiful writing my spine chilled in the presence of Achilles’ mother, the sea goddess Thetis, and I became a bystander in the battlefield of Troy awash with blood, exaltation, and despair. The Song of Achilles infuses the essence of Homer with modern storytelling in a combination that is utterly absorbing and gratifying–I can’t wait to see what Miller tackles next. –Seira Wilson

Gregory Maguire is the best-selling author of Confessions of an Ugly Stepsister, Lost, Mirror Mirror, the Wicked Years, a series that includes Wicked, Son of a Witch, A Lion Among Men, and most recently, Out of Oz.

Gregory Maguire: Ms. Miller, you write with the confidence of the zealously inspired, taking as your material one of the great foundation texts of world literature. In three millennia, The Iliad has garnered somewhat wider attention than The Wizard of Oz, with which I have played, so I have to ask: where do you get the noive? How did you come to dare to take on such a daunting task, and for your first book?

Madeline Miller: A little knowledge is a dangerous thing, and in my case it was just dangerous enough to get me started. If I had stopped to ponder, I think I might have been too intimidated. But it helped that Patroclus is such an underdog—giving him voice felt like standing up for him. I had been intensely frustrated by a number of articles that kept side-stepping the love between him and Achilles, which to me felt so obviously at the story’s heart. So I wanted to set the record straight, as I saw it.

Maguire: The novel tells the story of the rise, fall and immortalization of the golden Achilles. You approach his famous story from a sideline, that of Patroclus, his bosom companion and lover. Was it hard to keep the mighty arc of legend from overwhelming shadowy Patroclus, and did you write more of him than you ended up using, just to be sure you had him firmly grounded in your mind?

Miller: Definitely yes to the second. I actually spent five years writing a first draft of the novel, took a good long look at it, then threw it out and started from scratch. Even though not a word survived, that draft was an essential first step. It helped me understand the story and characters, especially Patroclus, from the inside out.

As for the overwhelming legends, I actually think they worked in my favor—because Patroclus is overwhelmed by them himself. He is this ordinary person who is pulled into a terrifying world of angry deities and destiny because of his love for Achilles.

Maguire: Having glancingly heard of this legend before, I knew more or less how it would end. I had no idea how you might handle the loss of perspective and point of view when tragedy would inevitably strike. You managed to narrate an almost impossible transition from life into myth in part, I think, by your instinctual use of a combination of present and past tense, to say nothing of a masterly combining of authorial and first person observations. How many slaughtered bulls did you sacrifice, and on whose altar, to deserve the talent to risk such dangerous technique?

Miller: It was a lot of bulls. And whatever ended up working, I give all the credit to my background in theater. When I first started writing, I had this idea that I should be in control of the story, forcing it forward. It never worked. What I needed to do was learn how to get in character, and write from there.

It took me a long time to find just the right tone for the ending—I kept writing and throwing away, writing and throwing away. Then, in the middle of apartment-hunting, inspiration struck. All the other ideas had started out well, but would gum up before they got anywhere near the finish line. But this one kept humming right along. And it was the simplest, so there you go.

Maguire: Oscar Wilde said something like, “The Odyssey was written by Homer, or another Greek of the same name.” But Oscar Wilde had clearly not met you. This is not a question. It is a salute.

“About this title” may belong to another edition of this title.

How to Write a Research Paper [Paperback] sparknotes-editors

Nazre Imam - May 10, 2022 0
Description: For wet weather protection that will never let you down the Maitland Jacket by Berghaus features GORE-TEX® membrane for complete waterproof protection and even...