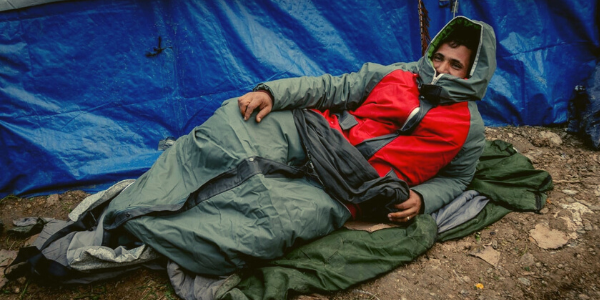 Around 6 p.m. on a Thursday night in February, Bas Timmer started walking around a park in New York City in search for people who are homeless. Timmer is a 29-year-old fashion designer hailing from Netherlands. He is mentioned here because of his latest creation of a warm, water and windproof jacket. It is especially designed for people who are homeless and suffer the harmful weather conditions due to lack of home. This unique design is called Shelter suit and does the hob of a sleeping bag. It comes with a backpack which is easy to carry.

To Timmer’s surprise, a Shelter suit. It turned out that she gave it away to a homeless man whose clothes were wet. Timmer, a gentleman, then buys a coffee for the woman and leaves another suit with her.

Timmer wanted to set up his own organization called Shelter Suit Foundation and was staying in America for the past three weeks.

New York Fashion week was taking place from Feb 6 to 13th and Timmer wanted the fashion industry to take note of the suit and so intentionally went ahead and gave out suits to the homeless in New York city.

Timmer even thought this might lead to donation of leftover clothing material from clothing companies to Shelter Suit as 30% of clothes are never used.

Timmer has been receiving materials like sleeping bags and tent cloth that is usually defective and had to be thrown away by companies. It all started in 2014 when Shelter Suit started getting all such stuff from companies. Since the suit is entirely carved out of upcycled materials, from the belts that can block out glaring lights on the streets, companies started associating with it.

Timmer has been into designing from the age of 16 after attending a vocational school in Netherlands. It is unbelievable but he even turned his bedroom into a sewing room.

His hoodie with a scarf became famous in the Netherlands. While he was doing a fashion internship in Copenhagen, Denmark, he took notice of a lot of homeless people.

He further adds, “I was making these warm hoodies, and I thought, maybe I can give these hoodies away to them,”.

His mother thought people might stop buying his hoodies if he gave them away for free. For quite a time, he pushed the idea aside. After almost two years, he knew he had to do something, when his friend’s father died of hypothermia while waiting in front of a homeless shelter that was closed for the night.

Every Shelter suit has a unique look and comes in various sizes from XXXS to XXXL. The production is done at one place currently in the Netherlands. Another good thing about Shelter Suit is that it hires Syrian refugees. They sew the suits which gives them a support and helps them integrate into the country.

It is hard to know from mere look at the Shelter suit on Timmer’s back that it’s actually a portable shelter for homeless people. It looks like a cool and durable backpack with a coat.

The organization’s recent idea is to expand worldwide, currently from America. He made his first visit to US in March 2019. He was actually invited by the Southwest conference to show the working of an urban safety kit that he had developed. It was during this time that he saw the homelessness in America.

Timmer says, “Here, you are kind of left on your own.” Netherlands is a place where people offer help to homeless ones. The homeless population has been considerably increasing in Netherlands from 18000 to 39000. At the same time, almost 92000 New Yorkers faced homelessness.

The ultimate aim of Shelter Suit is to put an end to homelessness. It has ventured into with shelters in Netherlands and wants to take the concept forward in the US.

Noelani Reyes, Shelter suit’s first full-time project manager in the US says “The first step to creating a solid bond between the social worker and the client.”

In this manner, homeless people shall feel comfortable to return and get the services.

There are social workers in the Netherlands and the U.S. shelters that provide services to help people ditch the streets. Reyes says “We want to create something that empowers people so that they don’t have to feel unsafe or unseen anymore. We want to start it here in New York, because there is a lot of opportunity in America in general. We want to be able to turn humanity back on again.”

The production of one jacket in Netherlands, costs about 300 Euros which is around $325. According to Timmer, the production cost in US can be reduced. The help from companies in terms of clothing and fabric will still be required. Individuals can also help. Tax deductible contributions can be made on Shelter Suit Website.

Initially there were misconceptions that people lead to homelessness due to addiction to alcohol and drugs. Timmer has had various discussions with the homeless and found out that there are many reasons for people turning up to homelessness.

Reyes marked in an email, “…at the end of the day you cannot profile homelessness into one category, which is why a lot of the social programs actually seclude people. Homelessness has many faces and many journeys.”

For instance, the woman with dogs who had given her first Shelter suit to help another homeless person. She was left alone as her mother died when she was 15, and her father wasn’t around. Her younger sister was adopted by her grandmother but she wasn’t able to adopt her. So this woman decided to turn down foster care as she didn’t want to be separated from her sister. She didn’t expect the second Shelter suit but she sure was happy and surprised on getting it.

10 Most Popular & Best WordPress Themes of 2020 On Themeforest

Nazre Imam - September 25, 2022 0
After a huge uproar over new liquor in Delhi, the old excise policy was implemented from September 1. Under this, in the...

Rahul Gandhi said about the raid on PFI – Zero tolerance...