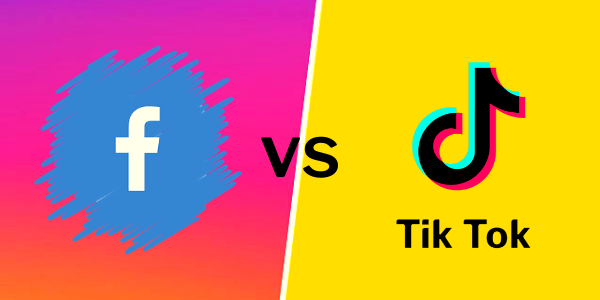 Both Facebook and Tik Tok do not require any introduction. The platforms have gained immense fan following & so the comparison between the two is quite difficult. But as per the statistics from Sensor Tower, there is a great twist in the success of Facebook.

Mark Zuckerberg states his no special love for Tik Tok and recently it has been quite a concern for him. The app is growing indefinitely and is gaining better recognition, even better than Facebook. Facebook V/s TikTok comes down to TikTok winning the game because of its more downloads.

As per Sensor Tower, the analytics company, TikTok was downloaded around 738 million times in 2019. The downloads for both Instagram and Facebook reduced due to its popularity. In fact, while discussing the comparison of Facebook Vs Tik Tok, Facebook was not even close. Facebook owned WhatsApp, was one app which was downloaded more.

A blog post of Sensor Tower stated, “TikTok’s 2019 installs represent 44 percent of the 1.65 billion downloads that the app has had to date.”

It is surely true not everyone who shall download the app will become an active user. But the numbers do reflect the hidden growth story that people didn’t know. Sensor Tower also stated that China, where the app is known as Duoyin, was ByteDance’s second largest market after the U.S.

All that makes Facebook V/s TikTok interesting is the constant pressure to Facebook to keep its user growth consistent. In order to do the same, Facebook has tried to inculcate features of TikTok in its own app.

It is interesting to note that Zuckerberg has even gone ahead in saying that TikTok, owned by Chinese company ByteDance, deserves more inspection. Apparently this rivalry between Facebook and TikTok took up when Mark Zuckerberg tried and failed to buy Musical.ly prior to ByteDance’s 2017 acquisition of the app which later became TikTok.

Zuckerberg during a speech at Georgetown University last year said, “While our services, like WhatsApp, are used by protesters and activists everywhere due to strong encryption and privacy protections, on TikTok, the Chinese app growing quickly around the world, mentions of these protests are censored, even in the U.S. Is that the internet we want?”

He further added, “China is now exporting their vision of the internet to other countries.”

Recent reports state that ByteDance has been considering selling at least part of the company in response to concerns from U.S. officials. TikTok has been constantly denying that Chinese officials lay influence over the apps policies, which is questioned by Mark Zuckerberg.

Well, whether the Chinese officials have an influence over TikTok or not, there definitely seems to be a little growth concern in Zuckerberg taking up with the fast paced growth of TikTok!

WP Astra Themes – Most Effective WordPress Theme for Your Website